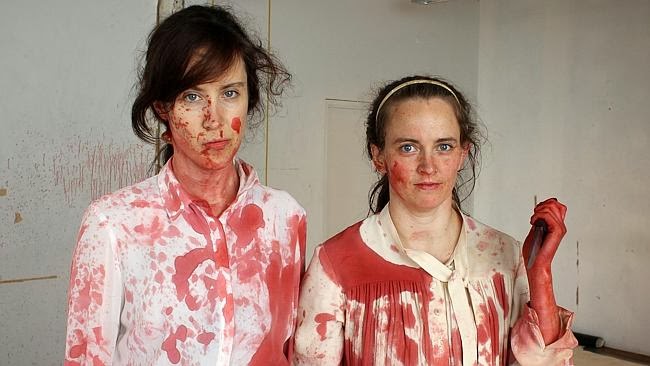 I liked the bit where the stage managers cleaned the blood from the floor.
Posted by Unknown at 16:24 No comments:

Email ThisBlogThis!Share to TwitterShare to FacebookShare to Pinterest
Labels: theatre 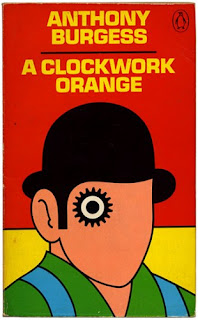 Thirty-four years ago, I was excited that we were reading Anthony Burgess' A Clockwork Orange for English class.  I had already read it of my own interest some time before, and loved it.  The books, with that gorgeous cover, were handed out. I read it again.  Discussing the work in class, I asked what had happened to the final chapter, where Alex imagines himself a husband and father.  Where's the baby? I wanted to know.  The teacher scornfully questioned my mental health.  There was no such chapter, he said.  I was humiliated.  And I was a bit scared.  How had I "made up" a whole chapter in a book?  The recollection of the chapter was so vivid.  I could only conclude I had somehow dreamed it.  I didn't speak up much in English class again. 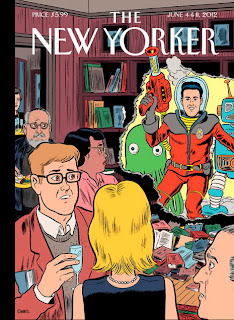 This morning I picked up the New Yorker of June 4th & 11th, the Science Fiction issue.  Yesterday, in its pages, I read the wonderful Sam Lipsyte story The Republic of Empathy, and Ray Bradbury's remembrance of discovering science fiction magazines as a child.  Today, I began reading Anthony Burgess' comments on A Clockwork Orange.  He wrote the article in 1973 when the release of Stanley Kubrick's film meant he "found [himself] called upon to explain the true meaning of both book and film".  It's a very interesting article - you should read it.

And on page 70, you will find the following paragraph:

"In the British edition of the book - though not in the American, nor in the film - there is an epilogue that shows Alex growing up, learning distaste for his old way of life, thinking of love as more than a mode of violence, even foreseeing himself as a husband and father."

The first time I read the book, I took it from my parents' bookshelf.  This is what I now think happened.  They must have had the British edition,  and when the book was given to us in class, we got the American edition.

Young people trying to learn should not be humiliated.  Even if they are wrong.  And if they say something that sounds a bit mad, maybe do some research yourself.

It is an incident I have never forgotten.  And though today I am vindicated by the author himself (thanks, Anthony) nonetheless I feel a lingering sadness.

But now I can re-read a novel which I loved - the language! oh the language! - because I realise I never read it again because of the shame.  Not even to check whether I was right.

(And Nerida Sims, wherever you are, one of the highlights of my late adolescence was the day you and I piled on the pale blue eyeshadow - hey, it was the 70s - and brazened our way into the R-rated film underage.)

The Cat's Table by Michael Ondaatje 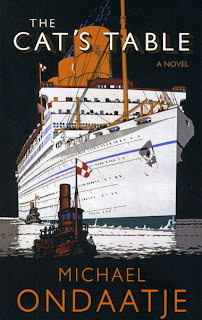 Michael Ondaatje’s 1987 novel In The Skin of A Lion still resonates with me these many years since I first read it.  It is a luminous account of migrant workers in Toronto, who were essential to building that city, while remaining always outside the mainstream.
Holding The Cat’s Table before opening its pages, I experienced that thrill of hope mixed with dread we feel when the author of a beloved book gives us a new one.
The Cat’s Table is as vivid and moving as In The Skin of A Lion, and yet deliciously different.  Set in the early 1950s, we are taken into the confidence of 11-year-old Michael, leaving his relations in Colombo to travel on the ocean liner Oronsay to England via the Suez Canal and the Mediterranean.  In England, his mother awaits him; a mother he is not sure he will recognise.
Though unaccompanied on the voyage, an elderly relative in Upper Class keeps a distant eye on him. His luscious cousin provides a warmer presence.  He is seated at the Cat’s Table for dinner, the furthest place from the far-off prize of the Captain’s Table, where he meets the other misfits and eccentrics on the voyage.  Among them are two other boys, the reckless Cassius and the thoughtful Ramadhin.  Their youthful association will affect each of them for the rest of their lives.
Not yet grown, they move invisibly through the worlds of the adults around them, grasping and failing to grasp the intricate dances of class, sexuality, commerce and criminal enterprise bursting the flanks of the ship.
Ondaatje’s prose whispers inside your head.  This is a storytelling master at work, as the dark night in the Suez Canal with secrets glimpsed on the shadowy banks beyond the railings gives way to a glimpse of Michael’s future.  The mystery of the shackled prisoner the boys spy on during his nightly guarded walks on deck, flows to the future lives of Cassius and Ramadhim, the promise of their youth informing the men they become.
The grown Michael, a successful writer, harks back to the Cat’s Table and those he encountered there, the place and the comrades he never left behind.
The Cat’s Table is a novel, but this vibrant and poignant work seems coloured by memoir.  This is fiction with the mess, tang and wonder of reality.

Posted by Sarah Carradine at 08:39 No comments: 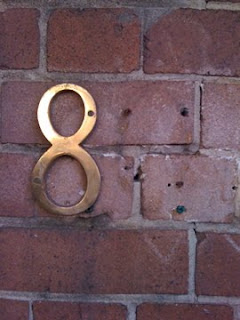 Email ThisBlogThis!Share to TwitterShare to FacebookShare to Pinterest
Labels: folly 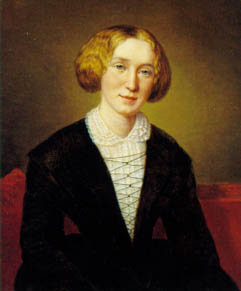 What was it that made me resist reading Silas Marner thirty years ago? Perhaps it was that the title, or a whiff of the plot, sounded a bit grim.  And who needs grim.  Or perhaps I thought myself such a Modern, I had no time for that which was Old.

Silas Marner is a delightful book, gently moving and quietly philosophical.  It makes you happy just to be reading it.  The neat 1965 Harper Perennial Classic hardback edition from Gertrude & Alice Bookstore in Bondi added to my pleasure at reading.

George Eliot wrote Silas Marner in 1861, between The Mill On The Floss and Middlemarch.  She subtitled the book The Weaver of Raveloe, and indeed Marner's occupation and claim on the village were well chosen.  Marner is an outsider, both by his almost alchemical working of yarn into linen, and by being a migrant from another part of England.  "He was simply a pallid young man, with prominent short-sighted eyes, whose appearance would have had nothing strange for people of average culture and experience, but for the villages near whom he came to settle it had mysterious peculiarities which compounded with the exceptional nature of his occupation, and his advent from an unknown region call North'ard."

Marner comes to Raveloe a silent, self-contained man, whose past we know but the villagers do not.  He lives for fifteen years in the village without becoming part of its community.  Eliot deftly introduces the villagers in their own words, standing back from caricature or judgement.  She lets them speak, and thus reveal themselves.  The Great of the area are represented in Squire Cass and his family, including the weak-willed heir Godfrey and the troublesome second son Dunstan.

Eliot will use Godfrey as a foil for Silas.  We are invited to compare the two men, in their characters, their material possessions and habits, and their dealings with other people. She opens their innermost thoughts to us in a startling and intimate way.
The story is a simple one.  Marner, solitary by turn of fortune, skilled at his work, amasses a pile of gold which becomes the focus of his life.  One night, the gold is stolen from him, and so he thinks the entire meaning of his life is gone.  But as if to replace false gold with real, an orphaned girl with golden curls toddles in his open door one night, and the redemption of Marner through the love and care toward another human creature begins.  Thus ends Part One.
A brief Part Two picks up sixteen years later, swiftly catches up with all the characters' lives, before driving to the extended climax of the book, the revelation of secrets.  What binds Marner, Godfrey Cass and the child-now-grown Eppie together?  "Everything comes to light sooner or later ... Our secrets are found out."
Perhaps 'climax' is too excitable a word for the steady revelation of the story and final unfolding of the characters.  There is a wonderful sense of inevitability about Part Two of Silas Marner.  Eliot has done all that was needful in Part One, and now, in the most natural way in the world, the story comes to a beautifully satisfying end.  And not without a pleasurable tear in the eye of the reader.
The gentle moral of the story is voiced by Godfrey: "There's debts that we can't pay like money debts, by paying extra for the years that have slipped by."
Don't wait to read Silas Marner.  There are such joys within these pages. Such joys.
Posted by Sarah Carradine at 21:12 No comments: 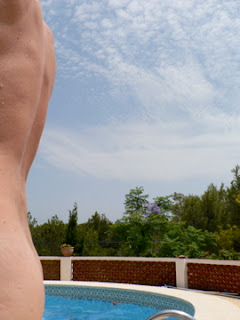 One evening, coming home from a theatre performance which was mercifully brief, I was sitting wearily beside my companion as he steered the car down City Road towards Cleveland Street.

From nowhere, the road was filled with nude young men, weaving between the cars and running along the footpath. They gleamed in the streetlights and car lamps, these naked boys, all shapes and sizes, intoxicated with their own youth and daring. They were giggling as they ran, shoed but unclothed, about twenty five of them. One held firmly onto his donger, but the others obeyed the Streakers' Code and let their flesh move as it would. They streamed past us, and turned into the forbidding Victorian stone gates of Sydney University, their buttocks winking their hilarious farewell at us, heavy and stationary in our cars, sad that we were old and clothed, and scrambling to remember the last time we raced through the dark in the nick.

Email ThisBlogThis!Share to TwitterShare to FacebookShare to Pinterest
Labels: get nude, Sydney 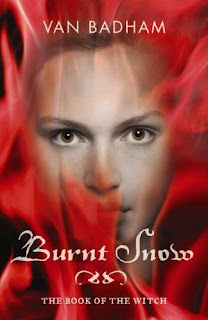 Burnt Snow: The Book of the Witch I by Van Badham (YA)

Yet again, sixteen year old Sophie Morgan finds herself the new girl. This time she’s landed at Yarrindi, a small coastal town south of Sydney. When Yarrindi High’s popular girls invite her into their clique, the chance to remake her image is too good to pass up. Shaking free of her mother’s overprotectiveness, Sophie plunges into the swirling morass of high school. What does Goth girl Ashley hold against her? Why does bad boy loner Brodie Meine have to be so irresistible? And is she safe from betrayal within the in-crowd itself? With Lauren, the sarcastic nerd best friend she left behind in Baulkham Hills her only anchor, Sophie struggles to find herself. Then her Finnish grandmother is felled by an enormous crow, and Sophie uncovers the disturbing secret of her place in the world.
Van Badham’s debut novel is a fantastic read. The characters are identifiable without being stereotypes. Older teens will recognise themselves and their friends in the kids of Yarrindi, as well as their confusions and discoveries. The occult elements are deftly realised and fit seamlessly into the quotidian world. There is sex and violence, and some genuinely scary moments. Badham beautifully sets up the rhythm between the daily grind of school and home, and captures the thrills of attraction, betrayal, ghastly visitations and self-discovery.
As the book thundered toward its exciting finale, this reader started to panic. Van! Van! There aren’t enough pages left to bring this to a calm resolution! And indeed this talented writer stops short at just the right moment, to leave her readers panting for Book 2, White Rain. Write faster, Van, I’m begging you.

(reviewed as part of the Australian Women Writers Challenge 2012)
Posted by Sarah Carradine at 08:47 2 comments: